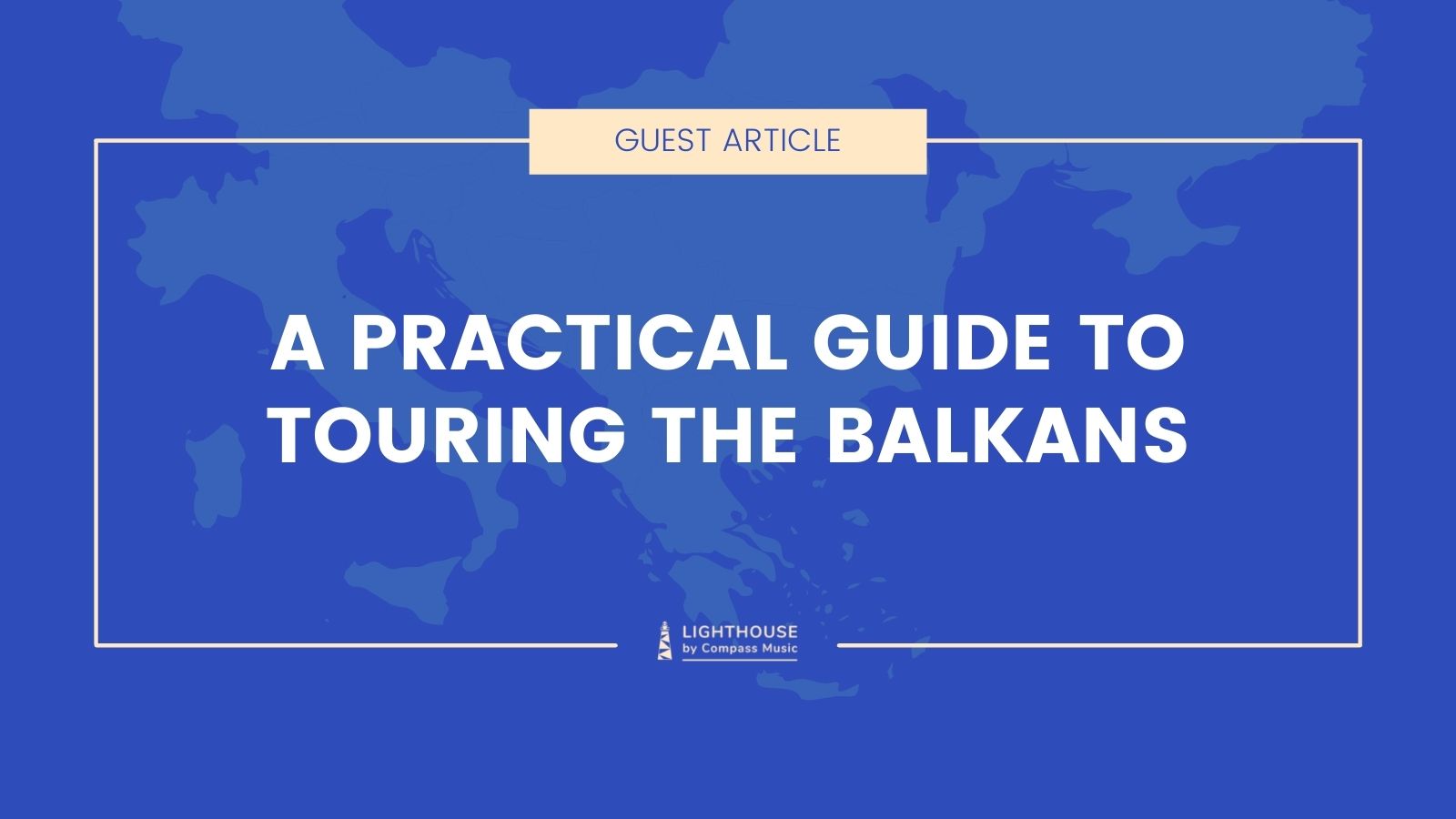 Tejka Vasiljevikj is a one-woman show. She’s playing drums in YÖU, drives bands on tour, does TM, works as backliner sometimes, promotes independent bands and loves stage diving. Today, she’s a production manager in Password Production and Head Representative for the Balkans for Women in Live Music. In her free time she loves eating pizza, drinking coffee and attending every possible concert. Tejka is the CEO of Skopje Drum Talks, an organisation for educating and supporting drummers.
Editor's note : Ah, the Balkans... Memories of weeks spent in this beautiful, sunny region with stunning food (always served with some rakija at the end), lush countryside, powerful history, vibrant cities, with a youth looking like they were definitely ready to party (clubs on a boat on the Danube anyone?). Those were my first impressions when I travelled there in 2015, and since then I've always wanting to come back and explore the region some more. Personally but also professionally, as I am convinced that the region will soon provide immense touring opportunities for European and international artists. Foreign travel and touring might not be fully back yet, but now is the right time to learn and plan! So if you like to go off the beaten track, I advise you to read the following as Tejka Vasiljevvikj shows you the ropes of how you can tour in the region, and provide a goldmine of information on the local players! Enjoy!
Are you an artist who wants to hit the road but thinks the world is too big to decide where to go? Have you ever considered the Balkans?
The Balkans are quite rural, famed for their stunning natural beauty, delicious food and convivial people blessed with an optimistic outlook.


For the most part, the touring process is mostly typical of any other part of the world, but there are details and facts that are unique to this particular region.
When it comes to the live music industry, people here don’t get to see any artist they like due to lack of venues, lack of audience and lack of cultural budget. As a result every time an artist of repute is scheduled, the excitement is palpable.


For those considering touring this region, here are some tips and experiences to help you.
For the prominent and established artists it is a matter of money. Can local venues raise the required capital? For the less prominent artist or artists it is a matter of contacts, solidarity and passion. Here is where the independent promoters jump in. It is best to remember that all the promoters know each other and everyone is connected so the booking process is easier when compared to other parts of Europe. There are promoters in the DIY scene and in the mainstream scene, but not too many of them, so they all know each other and work together sometimes. Therefore, once you write to one of them, that promoter can lead you to the others. It is known that not many artists tour this region, so sometimes the promoters collaborate together to make a tour happen.


Having selected your route and it is time to figure out the boring paperwork and what you actually need.

Documents for Touring in the Balkans

Hard borders do exist in most of the countries in the Balkans, so you will need more document preparation than when travelling Western Europe, for example. This includes valid passports, invitation letters from promoters, travel insurance, original documents for the transport you’re using (van, bus, nightliner) and ATA Carnet (known as passport for goods). Touring with an airplane can be more relaxing and you won’t need some of the documents above, but it is not very sustainable.


When crossing a border, it is important to be polite, informative and patient because waiting can take forever - always add a few more hours to your estimated arrival time. When traveling with trucks and lots of equipment, waiting can’t be avoided due to lots of paperwork (ATA Carnet), so having everything prepared ahead will make it a lot easier.

The ATA Carnet is an international customs document that permits the tax-free and duty-free temporary export and import of nonperishable goods for up to one year. It can be issued in the country where you live and you have to make sure you get all the country border’s stamps in it, otherwise you can have problems at the border for “illegal” export or import.

This information is not published anywhere when it comes to touring bands. It is very important because issuing an ATA Carnet is an extra cost in the tour budget.

Logistics of Touring the Balkans

The Balkans have smaller music markets, different standards, not a lot of venue choices or arenas, language barriers and bad roads. It is imperative, therefore, to research individual nations. Not all the countries of the region are as highly structured as others when it comes to live shows. Slovenia is awesome, but Bosnia can be tough. Croatia can be fun, but Serbia is wilder! Some venues are built differently, some of them own a complete PA system, some of them just rent it occasionally, some of them own older gear and technicals. All of this plays a big role in the rider requirements.

Sometimes promoters can’t provide things such as specific gear (some countries just don’t have required equipment and must bring it from abroad which costs the promoter more than calculated) so being flexible and understanding in situations like this means a lot to the local crew that works on your tour.

This is not something that you deal with every day, but it can happen. I once had to source a specific brand of a pedal from abroad because it was never imported to that particular country.


Safe parking is a must. Robberies can happen while touring and finding a safe parking place can save your tour. Always have two people sleeping in the van or nightliner.
Most of the countries have their own currency, so make sure you stop at the first exchange office. Albania uses the Lek. Bosnia and Herzegovina, the Convertible Mark. Bulgaria, the Leva. Croatia, the Kuna. Kosovo the Euro. Macedonia, the Denar. Montenegro, the Euro. Romania, the Leu. Serbia, the Dinar. Slovenia, the Euro. Credit cards work, but are not accepted everywhere so it is advisable to carry local currency.


Language barriers do exist in the Balkans. Even though the younger generation tends to speak English, providing a local guide can help you get around more easily.

Be Prepared for the Day Of

When the tour starts, prepare yourself for the fact that every day will run differently. Some days will be more smooth than others. Once you arrive at the venue make sure that everything you need is provided. Let’s start with the electrical power. No electricity means no show! Every venue is built in a different way, with different high voltage tie ins and since we are in the Balkans, there are no specific laws and standards for venue constructions in some of the countries. Don’t be scared, they are safe! The Europlug is used throughout the Balkans.
Let’s move to the fun part! “Which cities can I play? What are the coolest venues? Who should I contact?” It’s all below!

Country-By-Country Guide To Touring In The Balkans:


Cultural note Talking about the war in Bosnia is very emotional for the people who live there. Avoid this topic of conversation unless a native initiates it.


Cultural Note
Drinking rakija with the locals is a must.


Croatia Fun Fact
Some of the locations of Game of Thrones were filmed in Croatia.


Music Festivals in Bulgaria
Hills of Rock, Midalidare, Wolf Path, Meadows in the Mountains, Goat Milk
Cultural Note
Bulgarians nod their head for No, and move it sideways for Yes. Don’t get confused!


Kosovo Music Festivals
SUNNY HILL Festival, Pristina Jazz Festival, Dam Fest, Beer Fest, Etno Fest,Rock United Fest, Dokufest
Cultural Note
Kosovo is not part of Serbia. Artists who come to Kosovo should be aware of this. Offense is taken when a view to the contrary is conveyed.
Never use the words: Qifsha Nanen or Kurve

In the list below we have new conferences like Prishtina and Sofia that are happening for the first time this year. Ment has the venue Kino Shishka as a base where you can follow all the panels and some showcases, the rest of the program transfers to Metelkova where bands are playing in numerous other local venues.


Pin is held in the cultural center MKC, where all their spaces have a different showcase and there is even a venue in the bathroom. How cool is it to watch a punk band from Sweden in a toilet in Macedonia? Wild, right? Kontakt has a showcase in SubBeerni Center that used to be a beer factory in a tunnel.

Each year there are at least 200 professionals coming to these conferences from around the world. Attendees have come from as far as the United States, Mexico, and the UK.

When it comes to artists, these conferences provide the newest European talents no matter the genre and at least 50 bands play, but it’s also fun to see artists from places as varied as Mozambique, Chile and Belarus. Most of the conferences below have open calls for their showcases, so feel free to follow up and apply.
Music Conferences & Showcases In The Balkans
*due to Covid, dates might change. Please visit each event's website to check for updates!
I hope this helped! It’s time for an adventure. Pack your stuff and enjoy the ride. Na zdravje!

May 2021. Written by Tejka Vasiljevikj in North Macedonia and edited by Compass Music in London, UK, and Paris, France. At Compass Music, we commission articles on the music industry for our blog The Logbook, about how it works in different corners of the world. Our articles aim to be first and foremost informative in form and content, and to open our reader's minds to diverse viewpoints in the sector. Author views are their own.

Written by Tejka Vasiljevikj and edited by Compass Music in London, UK and Paris, France. At Compass Music, we commission articles on the music industry for our blog The Logbook, about how it works in different corners of the world. Our articles aim to be first and foremost informative in form and content, and to open our reader's minds to diverse viewpoints in the sector. Author views are their own.